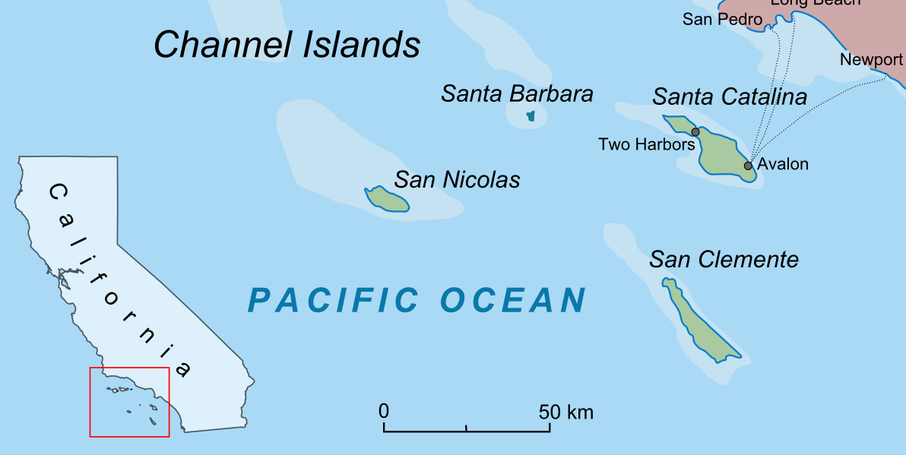 Santa Barbara Island (639 acres) is 1.67 miles across at its longest point and lies 73 nautical miles (nm) Southeast of Santa Barbara. Santa Barbara Island is the smallest of all of California’s Channel Islands and the southern-most member of the Channel Islands National Park. Like most of the Channel Islands, it can be seen from the mainland on exceptionally clear days usually in winter, though the island’s profile is markedly lower than those of its bigger counterparts. The highest peak on the Santa Barbara Island is Signal Hill, at 634 feet. Despite its volcanic composure of Miocene basalts, Santa Barbara Island is not a volcano. The steep wave-cut cliffs of its shoreline indicate that erosion is still in its formative processes; this is one of the younger Channel Islands. Signs of a rising and falling ocean are marked into the basalt cliffs. Six wave-cut marine terraces can be found, an indication of both changes in sea level as well as tectonic uplift and subsidence (called porpoising). A 130 ft. arch dominates the aptly named Arch Point on the northeast corner of the island. Extensive colonies of birds reside on the volcanic cliffs of Santa Barbara Island as well as the two nearby offshore rocks: Shag Rock off the northerly shore (1 acre), and Sutil Island off the southwest end (12 acres). The steep cliffs and isolation from mainland predators provide safe breeding sites for thousands of sea birds. Santa Barbara Island, although small by any standard, boasts an impressive diversity in its habitats, with a few narrow rocky beaches, six canyons, and a badlands area.

Santa Barbara Island is known for its large rookery where you can spend hours diving with sea lions. Photographers get more opportunities to photograph these animals up close here than any Channel Island. The playful, curious pups will pose and frolic in front of a diver’s lens as long as one can stay in the water.

Diving Santa Barbara Island with Channel Islands Expeditions will take you to a host of incredible sites around the island, including the famous undersea “Arch.” The top of the reef just breaks the surface at low tide and the bottom of the arch lies in 40 feet of water. One of the more unique underwater arches in the world it makes the perfect backdrop for photographers. In addition to the “Arch,” there are many offshore pinnacles that are home to shear walls along with some of the largest clusters of purple hydrocoral found anywhere.

Santa Barbara has long been a prime destination for spearfishing. Warm southern currents coupled with lush kelp beds make this island attract a wealth of game fish. Calico bass, white sea bass, yellowtail, and an occasional tuna are among the species that can be found in the waters surrounding this island. As with all Channel Islands, a healthy spiny lobster population makes this a favorite destination during season.

Similar in many ways to Anacapa Island, kayaking Santa Barbara Island offers the perfect setting for this water sport. Weather permitting, your expedition leader may decide to attempt a complete circumnavigation of Santa Barbara Island. Wind and swell can be a factor, so attempting this trip is best done on one of Channel Islands Expeditions multi-day adventures. Kayaking long distances with a support vessel offers an added layer of safety for an unforgettable journey around this hidden gem of the Pacific.

Hiking on Santa Barbara Island will provide you with one of the most remote island hiking experiences of any of the Channel Islands. Don’t be fooled, the steep incline of this island can offer a challenge to just about anyone, but just beyond that you will find five miles of hiking trails with gentle rolling hills and breathtaking panoramic ocean views.

Though is thought to have never been permanently inhabited, Santa Barbara Island may have played a crucial role in the lives of the island peoples who occupied the surrounding Channel Islands for well over 10,000 years. Archeological evidence suggests that Santa Barbara Island may have been a convenient stopover on inter-island trade routes, a testament to its central location in the Channel Islands chain. The rich marine life found here may have drawn people to seasonally harvest the shores of this island for shellfish, seals, and fish. Recent studies indicate this may have begun about 4,000 years ago.

The first European visitor to the Channel Islands in 1542, Juan Rodriguez Cabrillo, a Portuguese explorer, made no mention of this island. Sixty years later, the island was named by Spanish explorer Sebastian Vizcaino, who visited the island on December 4, 1602, the feast day dedicated to Santa Barbara. The island was infrequently visited in subsequent years, owning largely to its sparse vegetation and lack of a reliable water source. Santa Barbara Island did play host to an assemblage of seal hunters, squatters, fishermen, and the occasional whaling ship off its shores.

A few notable individuals eked out a living here, chief among them the family of Alvin Hyder. After a winning bid of $250 in 1916, Hyder and his family assumed ownership of the island and were the first to establish a residence of any permanence there. Hard work and a constant struggle to maintain a supply of fresh water were trademark features of a tough existence on this island. Santa Barbara Island would become a part of the Channel Islands National Monument in 1938 and was utilized as Coastal Lookout Station during WWII. Santa Barbara Island became part of the Channel Islands National Park upon its establishment in 1980.

Santa Barbara Island is home to a large sea lion rookery and seabird nesting colonies, including three species of storm-petrel, three species of cormorant, and the once-endangered California brown pelican. It is also home to the largest breeding colony for the Scripps’s Murrelet, a threatened seabird species. Scripps’s murrelet is listed as vulnerable, and is mainly threatened by oil spills, as the population exists in such a small area and is adjacent to the heavily trafficked shipping lanes that connect to the Port of Los Angeles. Spring rains bring out the flowering plants, such as the Giant coreopsis, the endemic Santa Barbara Island live-forever (Dudleya traskiae), shrubby buckwheat, sea blite, and an annual poppy. There is a visitor contact station and museum on the island with exhibits, dioramas, and murals of the natural and cultural resources. 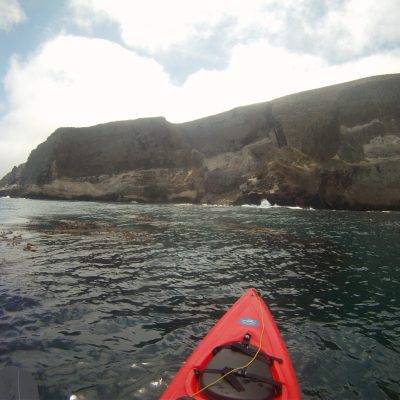 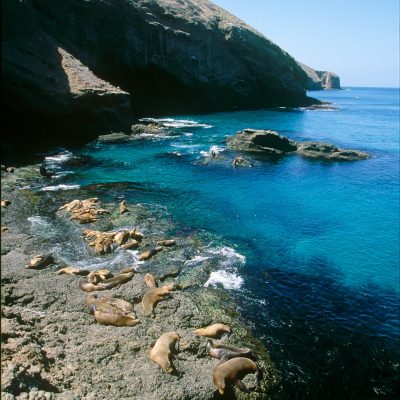 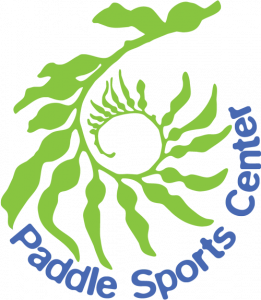